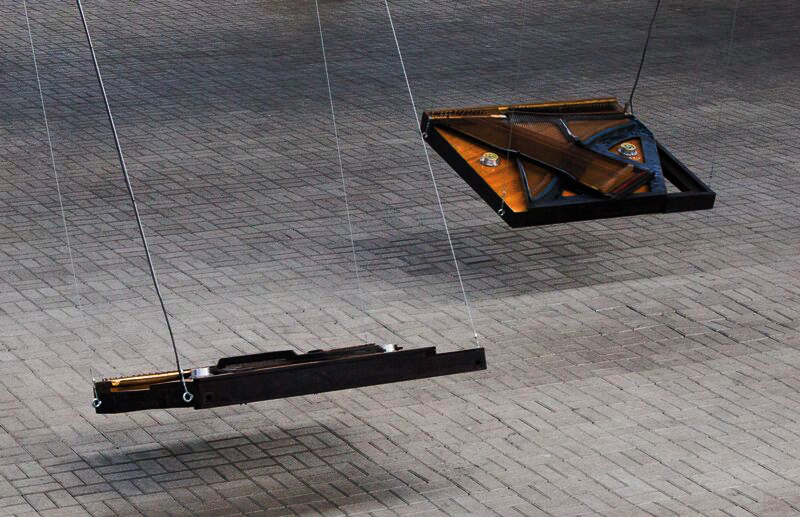 Piano / Forte is a sound sculpture in which two piano harps – two pianos stripped of keyboards and supporting parts – swing in the air like pendulums. Inside the pianos, a sensor (accelerometer) measures the variations of x,y,z positions, communicating with a custom software that translates the motion into sound frequencies. These frequencies are sent back to the pianos through electromagnets (transducers) attached to the harp. Instead of being hammered by keys, the sound is generated by the transducers vibrating directly onto the piano’s body, resulting in a multitude of resonances and reverberations.

The swinging is done by a performer or by the visitor(s), adding an interactive element of play. The iconic, dramatic effect, is both visual and sonic, as the mass of sound floods the space, in ever changing tempo. The programmed frequencies include intervals that allow the resonances to build up and fade away within time. The software was developed by electronic music composer and digital artist Rob Bothof, a frequent collaborator of Mike Rijnierse.

The title Piano / Forte refers to the origin of the fortepiano, predecessor of the piano as we know it today. The current work can be seen as an semi-automated prepared piano, a technique of intervention to extend the sonic quality of this traditional instrument, a research much relate to avant-garde American composer and theorist John Cage (1912–1992).

Mike Rijnierse (1974, NL) and Rob Bothof (1977, NL) collaborate in various multidisciplinary projects since 2015. Rijnierse is an artist, performer and art teacher who works with light, sound and motion and their relation to the architectural context. Bothof is artist, software / game-developer, animator, sound engineer and musician. His artistic work expands the thin line between art and science in the disciplines of interaction, animation, autonomous systems and procedural generation.