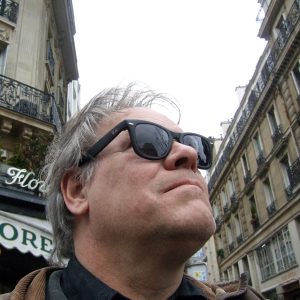 Peter Bruyn is a writer and music journalist. He writes for Haarlems Dagblad, Nieuwsblad v/h Noorden, Leeuwarder Courant, Gonzo (circus), UITkrant Amsterdam, Revolver / Lust for life, and more. He has also written for Wire, Oor, Aloha, Het Parool, Volkskrant and many more. He has published several books about music, and he runs the Frnkfrt blog together with Theo Ploeg.

Peter Bruyn was one of the organizers of the )toon) festival, a festival for experimental art and music in Haarlem that ran from 2000 until 2008.

In 2013 he was awarded the first Peter Bruyn Penning, named after him by initiators WORM and Gonzo (circus) for his continuous efforts to document contemporary culture outside of the radars of business models and marketing concepts.

At GOLF-festival Peter Bruyn will give a lecture on audiovisual media and commerciality.